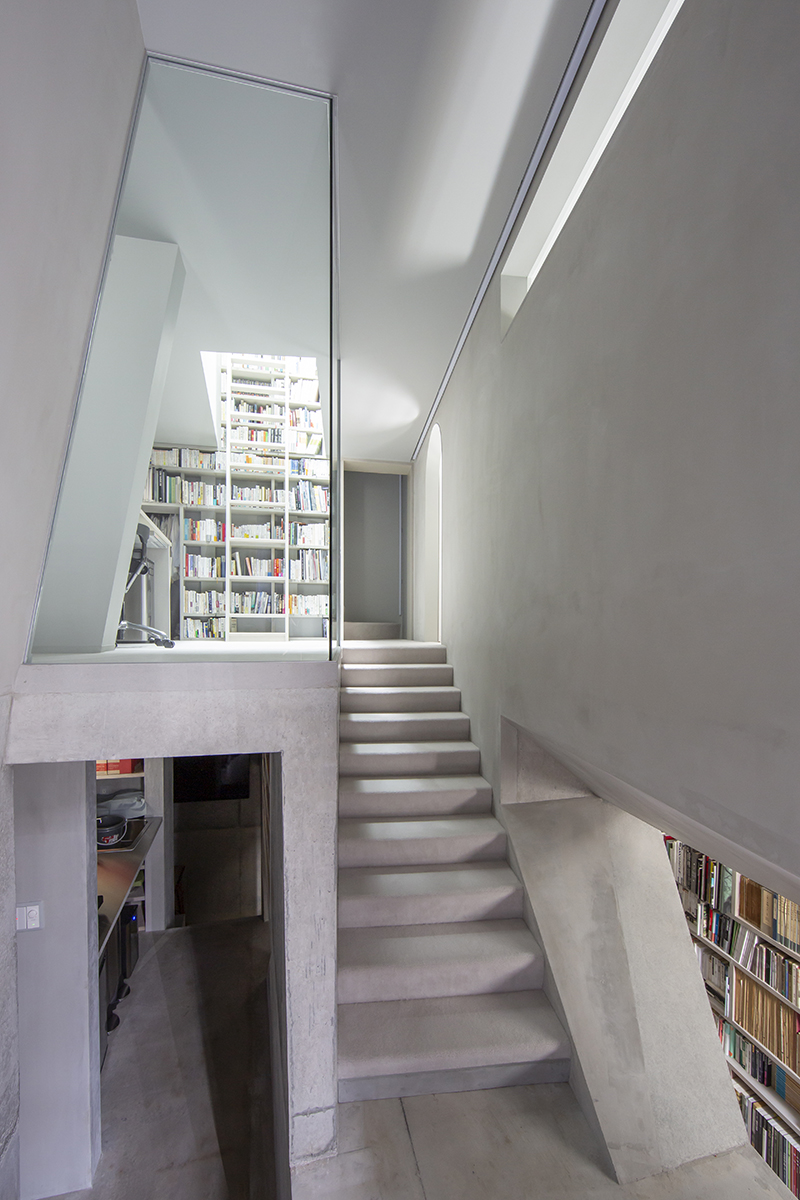 Architecture consists of flow and stagnation

I found the site for the new house in February 2017. Then a design process began. I did not start to draw something in a sketchbook immediately, however. A new design should be developed on the basis of an architect’s own past thoughts and designs. It is born in response to a concept internalized in himself. Now, I would like to briefly revisit the thoughts behind my past works.

I have published two collections of works that explain my architectural design. One is “Architecture as Frame” (Sankeisha) published in 2010. It expresses my thought that architecture is like a frame that cuts out the landscape inside and outside of it. The first time it occurred to me was when I saw House in Uehara designed by Kazuo Shinohara, my respected teacher. This building is characterized by a Y-shaped structure, and Y-shaped diagonal pillars are exposed inside the room. When I saw the building, I expressed my concern that the residents here might hit their heads against this pillar, and the teacher said that they would get used to architecture so they would not. Upon hearing that, I felt a little disappointed because his words suggested that architecture would lose its newness and become like an air over time. After this, I began to think if there is a building that can keep its freshness forever. Then, I realized that it’s not the architecture itself, but it’s nature, people, animals, furniture and other moving things inside and outside that are the keys in keeping architecture fresh and that the architecture is something like a frame that makes you appreciate what is outside of architecture. “Architecture as Frame” is a book in which all those thoughts are put together. For example, groups of windows in House with Ribbon Windows # 1, 2 and 3, a large pilotis of Re-tem Corporation Tokyo Factory, and a tunnel-like space in Fuji Ice Factory are all frames that cut out scenery and people.

Six years later in 2016, I published another book “Architecture as Frame and Reframe”. The word “reframe” was added to the previous title to indicate that another thought was added to “Architecture as Frame”. In other words, I wanted to put a different frame on, or reframe, certain parts of existing frames to emphasize them. I realized that I had applied new framing to almost all buildings I designed after publishing “Architecture as Frame” to emphasize specific part of existing frames. The brown-colored, low-ceiling space in “High Low House”, the middle corridor in “Three Corridor House” which is elongated and high-ceiling, the madder-red-painted space of “Madder Red House”, and the white void space of the “House House” are all such emphasized spaces.

Recently, I came to look at framing and reframing from a different angle. Rather than seeing it as a means to cut out the landscape, I reinterpreted it as a physical framework through which people, objects, light, wind, etc. pass. In other words, I came to recognize that architecture consists of the “flow” of people, objects, light, wind, etc. and that buildings are only a shell and it is the fluid, or moving objects, which continuously flow through it that makes up what architecture is. Reframing is then a factor that breaks or stagnates the continuity of the fluid. In other words, if a space is divided by frames to be lined up as AAA in “architecture as frame”, a discontinuous sequence of ABA will be created when a reframed space is added. It can also be said that AAA is a smooth flow while ABA is a stagnant one. In this way, “architecture consists of flow and stagnation.”

By the way, as I mentioned in the previous chapter, I wanted to renovate a tatami shop to create a house with a public space like a café. Here’s a story explaining why I wanted to make that kind of space.

I went to Argentina with Yoshiharu Tsukamoto in 2012 to hold a workshop. At the time, I gave an assignment to design a house to be built in Araki-cho in Shinjuku area, a neighborhood of my office. What was more, it was conditioned that the house should be more than a simple house with only private areas inside and that it should have a public space like a cafe, library or kitchen, where non-residents are allowed to come in. I called that additional space “Alpha Space” to connote something special. I had an expectation that Alpha Space would be beneficial in connecting the house and the community and generate liveliness in the residential area. This naturally led to the idea of ​​making the café-like space by renovating the earthen-floor area of the tatami shop.

The design of the new house began when my head was filled with two ideas, “Architecture consists of flow and stagnation” and “Alpha Space”. The story goes back to February 2017. I had to design a house for two of us on the site of 50m² I bought without thinking much. Considering the legal restraints of the site, the composition of the building that can be built here is a house with three floors, including half basement, each of which is about 30m². First, I thought about how to optimize this whole volume, which naturally led to a first question of where to put the “Alpha Space”. We wanted to make Alpha Space a public area to enter with our shoes on. It will be inconvenient if we place it on the middle floor, so I decided to put it on the bottom floor. And the hall where we can relax should be on the top floor to enjoy plenty of sunlight, which automatically determined the location of our working spaces, my study and calligraphy room for my wife, on the middle floor. The overall composition of the building was set.

What I thought about next was the flow planning for this 3-storied house. Stairway is inevitably pushed to the corner in a small house. However, “flow” is an important component of architecture and the movement (flow) of residents (my spouse and I) is a significant element that constitute this house. I came to think that the house gets energized when we move around comfortably and smoothly along the line of flow. I don’t mean we are the heroes of this house. We are one of the most important parts of this architecture. So, it will be nice if we can enjoy ourselves by strolling around inside the house, and it will be nicer if we could take a nap or a break during the stroll. I wanted to create a chain of spaces where flow from moving around and the stagnation from resting or lying down coexist. Next, I wanted to embed scenery as something to enjoy while taking a walk. In fact, I’m talking about the interior, but let me use the word “scenery” because I wanted to appreciate a sense of distance implied by the word “scenery”. I thought that creating a place from which I could see things in the distance inside the house would turn a simple stroll into a more dynamic experience. So I devised particular interior structure that allows our line of sight to extend as far as possible from where we would rest and lie down, providing the distant feeling .

In all cases, views of different distance, from a close view in a frame to a medium view laid beyond the close view and to a distant view further out, make us feel a greater distance than the actual distance. The gaps between the distances in a small house help produce strong architectural expression.

Architectural concepts internalized in me as “flow and stagnation” and “Alpha Space” have been matured to become the concept of “movement and scenery” and materialized as our house on this Kagurazaka building site, where residents enjoy the scenery in between their movements generated in Alpha Space .

People might question if “movement” as the concept of a house for an elderly couple is appropriate. It had already been determined when I decided to live in Kagurazaka. It is almost impossible to live in this town of many steep hills if we are not active enough to move around in this house, and I think half seriously that the house would work as an exercise tool that maintains our healthy life span.